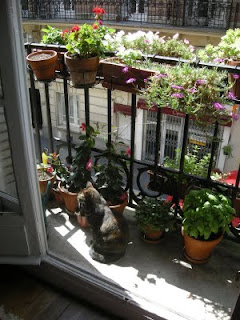 I meant no harm.
Only the tip of my middle finger -
blind and round
and monstrously bigger than
your yellow, fast little body in its fierce rugby jersey -
alerted to a small tickle, made a lazy tour of the back of my collar
and encountered you,
dutifully inspecting the pale expanse of my neck
in fruitless pursuit of the possibilities implied by my misleading perfume,
baffled but industrious.
Stung,
you zipped off, leaving an angry souvenir
in my dumb digit. I meant no harm,
but then again, neither had you
and for a moment (how it hurt!)
for a moment you were the more powerful.
Posted by Miranda Richmond Mouillot at 9:14 AM 1 comment:

Take me out to the (foot)ball game 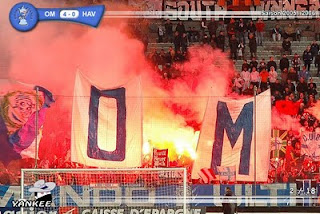 In honor of Marseille's winning 1-0 against St. Etienne last night, an old one from the Miranda file (excerpts):


i have not seem much of marseille but the
stadium, which sits in the middle of
a sort of postmodern wasteland, looking like an enormous cement spaceship.

marseille fans are not like american sports fans.
sure, like everyone else, they take it hard if the team doesn’t win,
but in their case, if the OM loses for too long, they fire the coaches and
take to the streets.

as you approach the stadium, you pass from the ring of comestibles vendors to the ring of ticket
scalpers. “does anyone need an extra ticket?” they chant, dolefully.
once you’re past them, you come to the realm of people looking for tickets.
they say, “does anyone have an extra ticket?” wistfully.
you would think that eventually one group would meet up with the other
but i think that it is some level in the dantean hell, and they are forever separated, kept apart
by vigilant hawkers of unauthorized olympique de marseille paraphernalia.

the stadium itself holds 65,000 people
and is usually nearly full.
nestled in the bottom of it, the field itself, and the players, look almost insignificant.
on the north end and the south end of the stadium are the virages, or bleachers.
they are controlled by two separate factions, the fanatics and the ultras, respectively.

the virage du nord (fanatics) is more homey and slapdash looking
most of their flags are drawn and colored in by hand;
the main theme is written at the top of the virage:
“MARSEILLE TROP PUISSANT”
and the color scheme is pure Marseille: pale blue, white, and yellow
but they’ve got a lot else going on––there’s a big banner that says
“Trichosomie” (Downs Syndrome)
and another that says “TOLERANCE” which is rather funny
coming from a group of people who spend hours of their lives
shouting rude things about the sexual histories of the opposing team members as well as their mothers and wives.

the virage du sud (ultras) is much slicker and meaner.
the top of their virage says
“INDEPENDANCE SOUTH WINNERS”
then a picture of Che Guevara
then “MARSEILLE KAOTIC GROUP 1987”
the color scheme there is orange and blue.
and they have a drum corps with orange drums.

both sides set off flares when the OM marks a goal
but neither group has a single mascot.
i have tried to detect some themes:
the sudistes have gone with a grim-looking man whose flesh is decomposing
off of his face while he clutches his throat
and proclaims his (undying, i presume) allegiance to the OM.
they also favor large confederate flags––an interesting choice
for a fan base which is largely of arab and african origin––
which they wave vigorously throughout the match.

the virage du nord has a lot of banners that say
YANKEES
but i am not sure whether this is a continuation of the civil war theme
or just some strange alliance to new york, since they also have banners that say
DODGER’S
either way, the nord’s main mascot seems to be an extremely angry looking octopus
clutching, among other things, an enormous petard (joint), a beer, a banner, and a football in its tentacles as it writhes menacingly over planet earth.
Posted by Miranda Richmond Mouillot at 9:20 AM No comments: 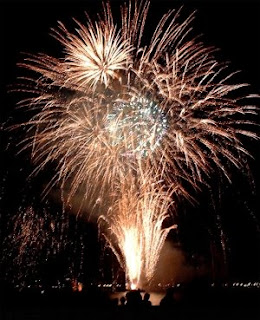 On July 14, 2009, at approximately 11:00pm, the Eiffel Tower celebrated its 120th birthday by dissolving into stardust. Spectators lined up along the Seine watched admiringly as the Tower, draped in dazzling gemstones, modeled her stellar coiffure and executed a few deft maneuvers with a highly original glittery hula hoop. "Do all those spouts of glitter tickle?" onlookers wondered to themselves; then the Paris night went silent for a split second and in the blink of an eye she had gone up in a flash of shimmer. A fitting end for the doyenne of the City of Lights.
Posted by Miranda Richmond Mouillot at 7:37 AM 1 comment: 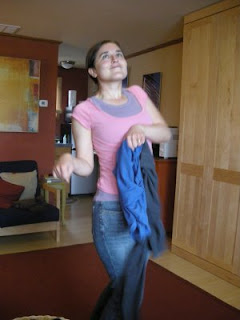 If I were a ship, I might get the above phrase carved on my masthead.
Barring that, I suppose I could tattoo it on my forehead.

(This is surely why I make so many faces; that and my grandma's face yoga, which has kept me supple as I inch my way toward the third-of-a-century mark.)

At right, I am showing, not telling, the bemusing challenge of unpacking
when you are addled by jetlag.

Don't complain, friends, and don't explain, but rest assured:
vacation (as you can see) has injected me with new life force
and the blog is up and running again.
Posted by Miranda Richmond Mouillot at 12:30 PM No comments: 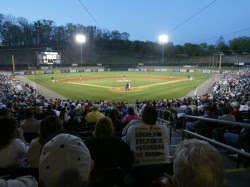 We head south...
Asheville:
Shindig on the Green
is,
according to itself,
the oldest folk festival in
the United States of America.
According to me,
it is almost as homey as katydids;
an occasion to sit in a warm evening and hear music
that makes my heart ache for summer.
Once it was an occasion for frock envy;
now I am older than six
I am willing to leave the petticoats to the cloggers.
This year, we discovered a new wonderful thing:
quarter watermelons may be obtained there for a dollar.

Knoxville:
In Pigeon Forge,
we ate peanuts and drank bad beer while
the Montgomery Biscuits beat the Smokies 6-3.
Then the next day watched snakes hoist their bodies over tree branches
turtles kick their claws through mud
and various sleepy lonely creatures lazing in the mud
then hopped into the Tennessee River; fish nibbled our skin
we lazed in the water to another concert of katydids.

It's good to be home.
Posted by Miranda Richmond Mouillot at 6:00 AM No comments: