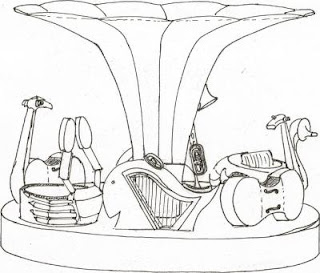 Alba may not have an ATM or a dentist, and cell phone reception here is spotty, but for all time we will be able to boast that we were one of the first villages in France ever to be visited by the Cacophonium. 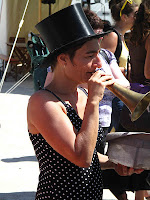 The Cacophonium (or "Le Cacophonium," as it is called in French) was invented by a lady named Céline, requires four square meters of floor space, and seats a half dozen children under the age of six. A turn costs €1.50, in exchange for which you get a zinc-plated 2” washer to slide on and off your fingers, slip into your pocket, or twirl around your thumb while you wait. 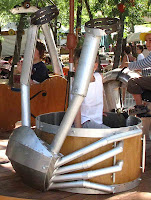 When it’s your turn to ride, you take your pick: you can climb into an old cello that has been rebuilt into a sort of a swan, sit tight in the body of a bass drum that’s gripped in the pincers of a tambourine-playing crab, straddle a harp in the shape of a whale, or take a ride on a steed made of old wind instruments.

Once everyone has clambered on, Céline begins to pedal, for Le Cacophonium is not just any merry-go-round made of recycled musical instruments and shaded by a big black café umbrella: it’s bicycle-powered by its inventor, a slender lady in a polka-dot dress and a top hat. 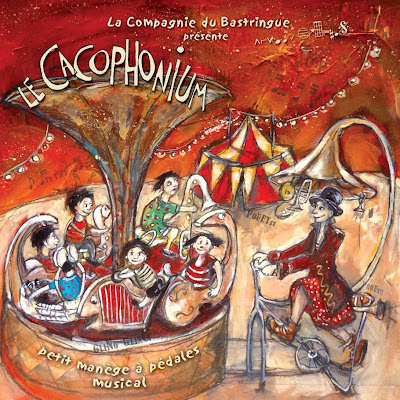 As a child, Céline dreamed of being a clown.
She watched the circus on television every chance she got, and whenever she had to pick something to dress up as, she picked a clown.
When she grew up she went to circus school, became a professional musician and juggler, and joined the circus.

That was before she had children, back when she liked to sit quietly in the morning with a cup of tea and honey.
Once her children came along, she gave up on tea and quiet mornings and began looking around for a project that mixed clowning, music, and motherhood. 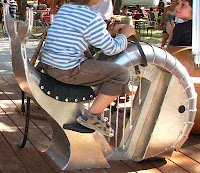 It was then she had the idea of the Cacophonium.
At first, she imagined a carousel mounted on the back of a fantastical bull that would make farting noises as it went around -
she figured children would appreciate the resulting "caca-phonie." 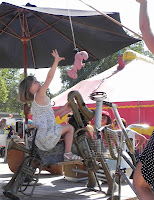 As her idea evolved, she thought of a tuba (official name, "euphonium") and of the merry chaos of noise her invention would make, and settled on "cacophonium" - perhaps someday every orchestra in the land will include a child-and-bicycle-powered cacophonium in its ranks.

Upon seeing it for the first time, one man smiled and said, “If that’s what happens to my old bugle when I die, that’s fine with me.”

Once they’ve climbed aboard, she begins pedaling and extends an old trumpet to her passengers; the children drop their zinc-plated washers into the mouth of the trumpet as they whiz by. The next time around she hands out musical instruments for them to play as they move, in addition to the noises they can make by pulling levers and pushing pedals on the carousel animals. 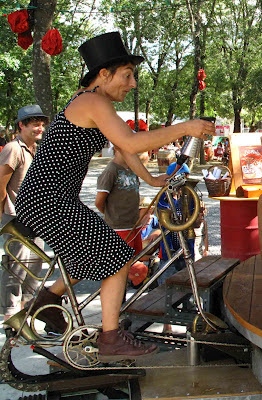 If you’re the right age at the right time, you can catch a ride on the Cacophonium this fall at the Féstival de la Basse Cour in Nîmes or the Art’Pantin Marionette Festival in Vergèze.


Images courtesy of the gracious lady herself, and Le Cacophonium/La Compagne du Bastringue.

Posted by Miranda Richmond Mouillot at 3:20 PM No comments:

Some thoughts on math, or why I'll never be an efficient waitress 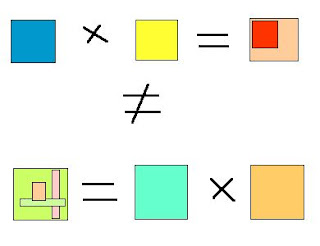 My time in France has included two stints as a waitress, once in Paris, and once in Alba. In both places, the owners were my dear friends, and in both places, they teased me mercilessly about how slow I was at doing the checks, and how often I made mistakes.

They were right, and I was terrible, but I would like to take this opportunity to say that my problem was not mathematical, it was synesthetical.

People accept as a general truth that a nice thing about numbers is their universality.
And I am here to tell you, friends: that is one cruel misstatement of reality.

As a general rule, there's little difference in my head between French and English:
In both I can dream, swear, ruminate, babytalk, argue, bake, bargain, joke, gossip, and tease.

But hell if I can do math.

As long as I live, I will never be able get my head around the idea that
seven times eight (pictured up top)
and sept fois huit (pictured below)
both come out to 56.
How is that possible??
It will never, ever make sense to me.

Right there is the real reason I am self-employed: I can take all the time I need to make sure that cinquante-six and fifty-six really are the same thing. As you can see from the calculations pictured above, I'm still dubious.
Posted by Miranda Richmond Mouillot at 1:48 PM No comments: 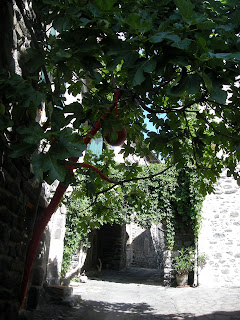 The French language is fond of things sublime in a way that English never is. Maybe it is the influence of the Protestant ethic on our collective unconscious, but in English, we tend to keep a damper on our enthusiasm for things “of such excellence, grandeur, or beauty as to inspire great admiration or awe.” If the adjective is kept in the shadows, the verb is nearly nonexistent: these days, chemists are the only English-speakers who get to sublime things, and unless you’re in psychoanalysis you probably don’t have much opportunity to sublimate, either. Whereas the French are always looking for ways to sublimer – everything from their fingernails to their pool parties. 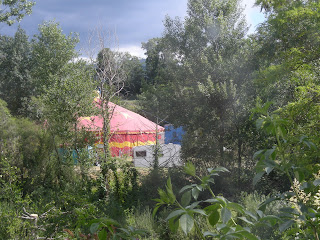 Perhaps the French are comfortable with the sublime because they know it lives just a step away from the ridiculous (indeed, it was Napoleon himself who discovered the pair’s official headquarters, in an undisclosed location on the outskirts of Moscow). Here in Alba, we devote an entire week each summer to mixing the two, as you can see from the photograph to your left, which was taken from our kitchen window. 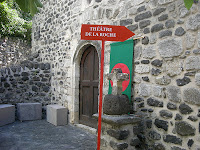 During the Alba circus festival, the streets are garlanded with red ribbons, and our hamlet is transformed, quite literally, into a theater. My husband has shut down the worksite in honor of the festivities; otherwise, it would be overrun with tourists, too. 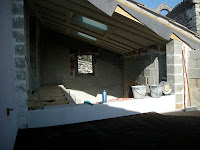 Just the other day, Julien surprised a Dutchman wandering around the lower floor of our house and snapping pictures. Luckily, the man knew just what to say when Julien asked what he was doing. 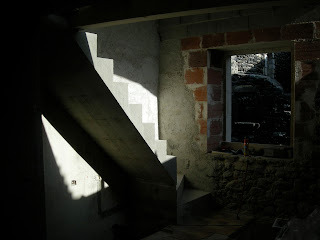 “Excusez-moi!” the man exclaimed,
“Mais c’est –” he waved his hand to take in Julien’s poured concrete staircase, the curve of the dining room wall, the soft gray of the hemp insulation on the walls, and the sunlight pouring into our future bay window – “c’est SU-BLIME.”
Posted by Miranda Richmond Mouillot at 11:39 AM No comments: 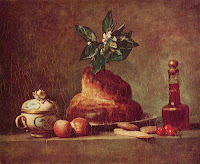 My husband, as I mentioned in an earlier post, once expressed his theory that language would eventually be boiled down to a single, highly expressive syllable, which he predicted would be bah. These are things you think about when you live in a bilingual household. Hard as you try, the one language begins to make incursions into the other; compression and spillage are inevitable. 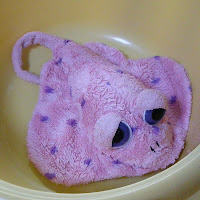 This happens for a number of reasons. Some words get folded into your vocabulary because they are cultural institutions: goûter is not the same as "teatime," nor is it quite an "afternoon snack." My grandmother fed me goûters, never snacks, and that’s what they will always be to me. With other words, it’s because there’s no translation quite as convenient as the original: there's no good catch-all in English for doudou, the soft security objects children carry around and sleep with (blanky and teddy are rough translations, but they're too specific). If you have ever wondered why the French don’t make sense it’s because there’s no way to say that in French, although there is a growing movement in favor of “faire du sens.”

And then there are words that are just too tempting, too wonderfully versatile, to confine to just one language: "Ça pique!" is a good example. Its connotations are both positive and negative; among other things it can be spicy, prickly, pinchy, tickly, stabby, pokey, rancid, or bubbly; it may refer to a pepper, a beard, a cactus, a crawdad, a fork, a toothpick, a mosquito, a bed of nettles, a carbonated beverage, or bad wine.
Naturally, when our daughter was born I wondered how she would adapt to the separation and the spillage of bilingualism, how she’d deal with the cultural, the versatile, and the irreplaceable. Would she discover peekytoe crabs and think they are named that because their toes can pinch you? Would she be traumatized to discover that doudou, when you pronounce it with an American accent, becomes smelly and distasteful?
So far, it’s hard to tell. She has a roughly equal number of words in French and English, which, right from the start, she acquired more or less at the same time – bain and bath, banane and banana, biberon and bottle: all of these she has boiled down to a single, highly expressive syllable, which, just as my husband predicted, is “bah.”
Posted by Miranda Richmond Mouillot at 12:01 PM 1 comment: