Faux ami no. 3: Scotch and Scotch 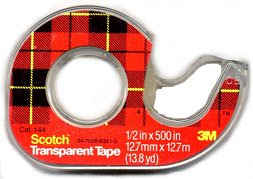 If you look up “tape” in a bilingual dictionary it will tell you that the French say “ruban adhésif,” but if you ever find yourself in a situation like the one below, it’s good to know that’s not the word they use in real life.
The first time I ever stayed in my grandparents’ house in La Roche, my grandfather warned me to watch out for shady characters. 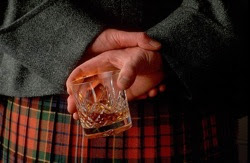 It was the summer after my sophomore year in college, and I was going to spend six weeks in La Roche with my friends Matt and Harry, and whoever else happened to wander through (Alba may be in the boonies, but you’d be surprised). The weeks went by and we didn’t see any shady characters, and I forgot all about my grandfather’s warning until one night Harry came into the kitchen and whispered to me that there were two people standing in the street with blackface on.
I was doing the dishes and wasn’t sure I’d heard him right. “What did you say?” I shut off the water and turned to face him. “Why are you whispering?”
“There are two people standing in the street with blackface on,” he repeated.
“Blackface?”
He nodded. “Down below the window. They have on black robes, they’re holding spears, they’ve got bones tucked into their belts, and they’re wearing blackface.”
“Bones?”
“Yes. Bones in their belts. Like some kind of tribal thing or something. Also knives. They’re stuck in the belts, too. They look like steak knives.”
Harry is a great raconteur, and I suspected him of pulling my leg, but steak knives seemed like the kind of detail you wouldn’t make up. “Are they druids?” I asked. I abandoned the dishes. “You’re making this up.”
“Why would I be making it up?” he asked. “People in the street with blackface? How would I even have thought of that?”
“How could you not be making it up?” I countered. “Blackface and robes and spears?”
“They asked me if I had any Scotch.”
“Any what?”
“Du scotch.” He imitated their accent.
“Why would they want Scotch? Are they drunk? Is it for some kind of ritual?”
Harry shrugged. “Ask them yourself.”
I remembered my grandfather’s warning. “Do they seem dangerous?”

I crept out of the kitchen and up to the window in the front room and peeked out. There were, as Harry had promised, two men in blackface leaning against the rampart walls below the house. The green streetlight cast eerie shadows over their faces, and their pale, knobby knees peeped out from knee-length black tunics tied at the waist with a piece of rope, which gleamed a little when the men moved. The steak knives, tied to their rope belts with string, were smudged with red.
It took me a second to realize that tunics were made from large plastic trash bags. Along with the knife, each man had a cardboard cutout of a bone stuck in the front of his belt. They also each had cardboard-tipped spears, one of which had lost its tip. I gave up hiding and stuck my head out the window to get a better look.
The one with the broken spear saw me. He waved hello. “Excusez-moi, est-ce-que vous auriez du Scotch, par hazard ?”
Matt had come over to the window, as well. “I don’t think we should give them any alcohol,” he whispered.
“For your spear?” I yelled down, and they nodded.
“Scotch like Scotch tape,” I said to Matt and Harry, in English. Someone went and found a roll of tape and we tossed it down to them.
The three of us stood at the window and watched them try and fix the cardboard point back onto the end of the spear handle. It wasn’t going very well. Even with several layers of scotch, the point flopped in a manner not really befitting a spear. It was a hot night, and their blackface was getting smeary from the exertion.
We got tired of being squished up at the window, and we went back out onto the terrace. “I want dessert,” Matt said. “Is there any more of that pudding?”
“Nope. Harry and I finished it yesterday.”
“Jerks.”
“We have Nutella,” I suggested. “And white wine.”
We agreed this would do in a pinch, and Harry went inside to fetch it. When he came back, he went and peered over the side of the terrace. He waved politely. “Ask them if they want some wine,” he said to me.
“Wine,” Matt said. “Wine –– why don’t you ask them what the hell they’re doing in our street at ten o’clock at night in blackface, for God’s sake.”

I sidled over to the terrace wall and looked down. They waved. “Want some wine?” I asked.

“Not with the kids,” said Droopy Spear.
“We’ve got to be in good shape for the kids,” Pointy Spear agreed.
I turned back to Matt and Harry. “They can’t drink because they’ve got to wait for the kids.”
“Are they going to do some human sacrifice?” Harry inquired.
I turned back to the guys in the street. “What kids?”
“At the summer camp in Aubignas,” Droopy Spear explained. “We always bring the kids over to Alba and do a scavenger hunt with them.”
I related this to Matt and Harry.

“Ask them when their Birth of a Nation reenactment is,” Matt said.

“A scavenger hunt in costume?” I asked, not sure how to broach the whole blackface issue.
“You know, an African princess gets kidnapped, and the kids have to go all over Alba and la Roche and ask questions, to find out who did it,” said Pointy Spear, as if he were going over the rules of Simon Says with a mental patient.
“We’re the king’s guards,” Droopy Spear added. “They can only ask us yes or no questions.”
We heard footsteps clattering down the street, and Droopy Spear hid the Scotch tape and snapped to attention. A group of kids and with a bored-looking counselor straggled to stop in front of the guards, and we ducked behind the wall of the terrace.
“Those aren’t real bones,” a kid said.
“QUIET!” Droopy Spear thundered. “WHO GOES THERE?”
The kids giggled. “Where’s the princess?”
“You may ask yes or no questions.”
“Why is there blood on your knife?”
“You may ask yes or no questions,” pointy spear repeated.
“Where is the king?”
“You may––”
“Remember, the king’s dead, we just found out,” the bored counselor reminded them.

“Ask them since when it’s okay to wear blackface,” said Matt.
“That’s not a yes or no question,” Harry pointed out.

“Is the princess with you?”
“No.”
“Have you seen the princess today?”
“Yes.”
Droopy spear cleared his throat.
It shall ever thus be told
what some bad men will do for gold.
The king is dead, the princess gone,
In this plot she is a pawn.
Before the young girl’s life’s cut short,
Look for her inside the fort.
Silence. "What is that supposed to mean?”
“The fort,” the counselor sighed. Silence. She pointed up the hill. “You know, like a castle,” she added.
The kids clattered off towards Alba’s castle. Before we had time to say anything else, Droopy Spear and Pointy Spear had packed up their arsenal, shouted goodbye, and disappeared into the shadows beyond the rampart walls.
I have lived in Alba on and off for many years now, and though I have encountered more than a few scorpions, I never saw those two young men again. So if ever you’re in the Ardèche and you run across someone in blackface, would you do me a favor and ask for my tape back? And please, for the sake of the kids, don’t give them anything to drink.
Posted by Miranda Richmond Mouillot at 2:48 PM No comments:

French vocabulary no. 4: the boonies