Say cheese! It's a new year 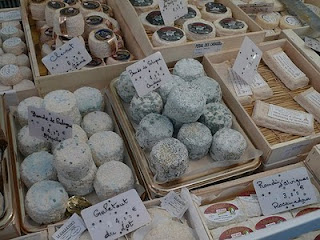 The Saturday after New Year's we were at the market ordering cheese at our favorite cheese stall (run by two cheese geniuses, whom I'll call M. and Mme. Cheese.) when a round-ish, fur clad woman swept up and brushed us aside.
She fixed Mme. Cheese with a stare. "I must say this in front of everyone!" she said.
Mme. Cheese, who had been chatting with us and packing up our order, stopped dead in her tracks. "How was it?" she asked.
The fur-clad lady, now that she had everyone's attention, repeated her announcement. "I am obliged say it in front of everyone," she trumpeted.
M. Cheese had dropped his own order and hurried over to his wife, who had paled visibly. They both stared anxiously at the fur-clad lady. "Well?" M. Cheese asked.
The fur clad lady's gaze swept up and down the line of people waiting for their cheese. "Picture this," she said. "Twenty people." She gestured to indicate a long table. "Twenty of the most discriminating people." She held up her hands, palms flat up, to indicate a platter. "I bring it out. I put it on the table. I serve it." She paused and looked around again. The rest of the patrons of the cheese stall had given up any pretense they might have had of minding their own business and were staring openly. The air was thick with the possibility of a scandal.
"And?" Mme. Cheese prompted.
"Silence." The fur-clad lady waved her hands up and down the imaginary table in front of her. The cheese stall was also silent. The fur-clad lady drank it up.
"IT WAS SUBLIME," she thundered. "SU-B-L-IME!!!"

Here's hoping that 2010 is as rich and full and delicious for all of us as the fur-clad lady's brie.

(Photo by Joe Hale)
Posted by Miranda Richmond Mouillot at 8:18 AM 1 comment:

Email ThisBlogThis!Share to TwitterShare to FacebookShare to Pinterest
Labels: these are the people in our neighborhood, vasco de gama
Newer Posts Older Posts Home
Subscribe to: Posts (Atom)