A little over a thousand years ago, the Romans chased Alba's inhabitants off of their little hill and across the River Escoutay. They built an outpost of their empire on the plain below the village, which became a thriving city, with a forum, luxurious homes, a temple, baths, and a 3,000-seat theater.

No one knows why the Roman city disappeared and Alba's inhabitants moved back up onto their hill; nor can anyone say just how long it took for the earth to swallow up the old city. We do know that once it had been lost, it took centuries to find again.

The theater was excavated and partially restored in the mid-twentieth century. Now, every summer, the Alba circus festival hosts shows there. On long summer evenings, there's no need for lights - the theater was designed so that the sun fills it with soft light without blinding the players. The acoustics are grand, as long as they remember to chase the frogs out of the canal that runs behind the stage before the show starts. 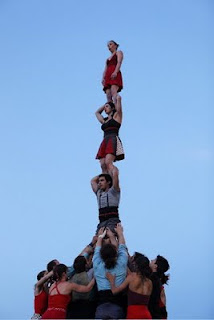 Saturday night, seated on giant volcanic stones warmed all day by the sun, while we waited for La Compagnie XY to perform their acrobatic show "Le Grand C," we wondered what it must have been like when the theater was more than a majestic ghost of its former self, when the stands were covered and the canal played host to miniature naval battles. But when the acrobats sped nimbly onto the stage and began to scale, swing, spin, and toss each other against a backdrop of sunset and vineyards, the hour of pure grace more than made up for all that time had swallowed up.
Posted by Miranda Richmond Mouillot at 8:55 AM No comments:

Email ThisBlogThis!Share to TwitterShare to FacebookShare to Pinterest
Labels: neighborhood 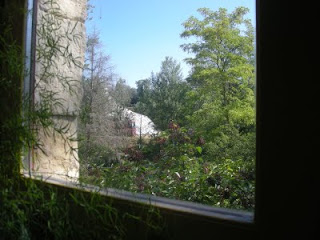 Yes, that is a circus tent in our back yard.

I hope your weekend is as full of adventure as ours promises to be...
Posted by Miranda Richmond Mouillot at 10:25 AM No comments: 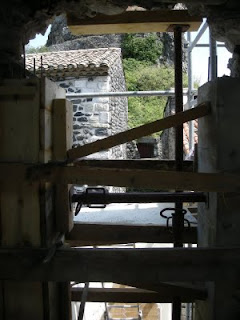 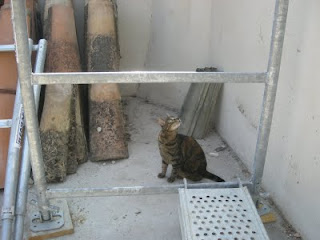 Here in France we call it La Fête Nationale, or just July 14.
And so you know, it doesn't actually commemorate the taking of the Bastille.
It actually commemorates the Fête de la Fédération,
which was organized on July 14, 1790
to commemorate the taking of the Bastille.
On that day, King Louis XVI swore allegiance
to the Nation and the Constitution.
We don't have a king anymore,
and we've changed constitutions a few times since then,
but the French didn't want their national holiday to commemorate violence.
So instead we have a holiday that commemorates a holiday that commemorates violence.
Huh?
I know, I know. We may not like violence over here, but you know what we do like?
Complication.

Julien and I celebrated by hauling 700 kg of concrete to pour reinforcements for the doorway of the master bedroom in our house. Then we swore allegiance to each other over lunch, and took a nap.

Pictured above: Minus, our worksite safety inspector, and the bathroom doorway, standing in for the bedroom doorway (not available for photos) to show you what it looks like when you pour reinforced concrete in the wall of an extremely elderly house.
Posted by Miranda Richmond Mouillot at 4:07 PM No comments: 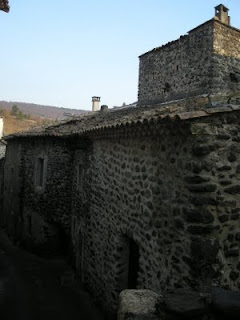 Friends, it's been a while.
We've had a baby, moved to the Ardèche, and bought a house to restore. I've started work on a new book.
I hereby announce that I will be keeping you apprised of the progress of our house, and of my musings about words, and possibly of the vicissitudes and lassitudes (as Romain Gary once said) of life in the country. Stay tuned...

Here's the new house, which is very, very old.