Pizza from the past

It is cold and rainy outside; also everything is closed for something the French state refers to as "Easter Monday."
So until I venture back out for another interview, here is something I wrote in avignon several years ago:

i do not usually like to make comments about
"the french" or "les americains" but
now i feel called to do so
like this:
in france those of us who have
had the privilege
of eating american pizza
we have become accustomed to the fact that the french
have a different understanding of what a pizza
ought to be;
for instance in america there is a sort of
general agreement that one should not
be able to cut pizza with scissors, whereas here in
france, scissors are the tool of choice, even amongst
professionals.

so granted we make a lot of jokes,
as we snip ourselves off a slice;
like, pizza delivery is easy in france
because you can just put the pizza
in an envelope and slide it under the door;
or, one friend, when his pizza arrived
forty minutes late and cold and soggy as a washcloth
someone had left in the tub after a bath
shouted at the delivery boy,
"well for god's sake,
why didnt you just fax it to me??"

you get the idea.

but, cosmopolitan as i may be
even i reeled upon disovering
while on my way to the organic supermarket

yes that is right.
it is constructed exactly like an atm for cash, except
painted bright red, with a wider slot.
"24 hours a day," this machine proudly proclaims, "one
can obtain a hot pizza, just by pressing a button!"
i didn't try it, but it appears that you make your
selection of toppings, put in your credit card, and
out slips a pizza, paper thin.

by the time you get it home, it is sure to have cooled
and congealed enough for you to clip and enjoy.
Posted by Miranda Richmond Mouillot at 6:11 PM 3 comments:

Away from the rue Vasco de Gama: waiting for the metro 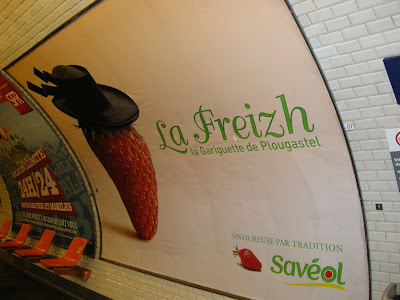 To me, this advertisement is like a Barsotti cartoon. The longer I look at it, the funnier I think it is.
Posted by Miranda Richmond Mouillot at 5:32 PM No comments:

Where Everything Is Sold 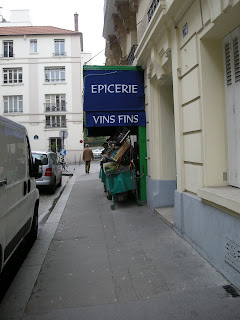 Only Kamel knows his way entirely around his grocery store, which is small and dim.
He can find you 30-liter trashbags, or saffron, or tortillas,
or fresh mint,
or an extension cord.
If he doesn’t have a funnel to sell you, he’ll lend you one.
Everything is piled in so close together
you are worried:
if you pick up that can of tomatoes maybe the whole store will fall over.
Kamel’s answer to any request is “Ask me for the sun;
I’ll give you the moon, and the sun to go with it.” If he doesn’t have it today, it will be
arriving tomorrow. He will get the word out, too, that he has it for you.
His store is named Le Jardin d’Ulysse for Djerba’s first tourist,
and from time to time he disappears from the rue Vasco de Gama,
to the spare, spacious opposite of his grocery store.
He hasn’t eaten any lotuses, and Djerba is always bright in his mind,
and he will show it to you
if you know him well enough -
the flat expanse of the courtyard, the cool stone hallways,
the vast kitchen he built for his wife. In the pictures,
his children are never far.
Kamel, in a white robe, presides happily over them;
orange trees, grape vines, date palms and olive groves crowd around his big white house,
and his youngest son trails everywhere after him, adoringly.
Kamel’s children are his pride and joy.
Two or three weeks, at most, and he is back in the rue Vasco de Gama
in his dark sweater and wool fisherman’s cap,
standing in the doorway of his store beside a wealth
of fruit and vegetables.
He has returned to the other people who need him,
to his emporium
of cat food and milk on Sunday evening,
of beer and gumdrops after the other stores have closed.
Kamel likes to talk but will not tell you much: he loves the scent of jasmine, pistachio ice cream, the voice of Oum Kalthoum; in the morning, he drinks his coffee with a drop of orange flower water.
But one night, François (remember him?) calls to tell us Kamel has an urgent message.
“You’re late,” he says, when we walk into the store. He hands us a covered terra cotta dish. “Get out,” he tells us amiably. “Eat it before it’s cold.” And he sends us back to our apartment with a little taste of home.
Posted by Miranda Richmond Mouillot at 10:19 PM 2 comments:

Email ThisBlogThis!Share to TwitterShare to FacebookShare to Pinterest
Labels: these are the people in our neighborhood, vasco de gama 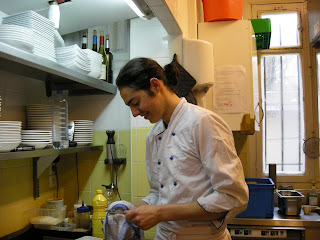 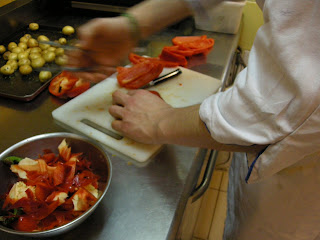 François Pierre Stefanaggi,
who loves anything caramel,
would have liked to be named Arnaud
or Guillaume
or Clément
- any old name.
François was so old fashioned - rinky dink, sort of.
He doesn’t like people you can’t trust
or the taste of dirt.

François came to the rue Vasco de Gama because he wanted a job that would feed him. Also, he wanted to stop working as a checkout boy at the supermarket. Really, what he wanted was to quit the Sorbonne. He wanted to make music and write - he wrote a short story last night, actually. He wants to write a novel that would be like snaphots of life, snipped apart and reassembled. He plays the guitar.

When he got out of the metro for the first time he thought that the rue Vasco de Gama was long and empty; lifeless, but the restaurant was warm, much friendlier than he’d expected. He was coming from a certain emptiness himself. The first person he met here was the old chef - a foreshadowing of what was to come? Corinne, the owner, was late.
He came to be a waiter
(no pun intended),
and at the time he didn’t know the first thing about cooking.
It has been a year, and now he is the chef. He learns fast; he is proud of his adaptability.

He’s grateful to wake up every morning,
though he hates getting out of bed,
and likes a big cup of coffee with one sugar in it,
preferably accompanied by a cigarette.

In the kitchen he moves fast - sometimes too fast. His favorite thing to make is poitrine de volaille entre chair et peau de foie gras with choucroute au miel et aux raisins secs. He attracts problems,
confidences,
people.
If he had a soundtrack, no doubt about it,
it would be “Hotel California,” by the Eagles.
He gets a little melancholy sometimes
but really,
compared to the troubles he could have,
everything is so small,
he’d say he’s got a good lot in life.
Just because I’m interviewing him doesn’t mean he’s a complicated boy, you know?
Posted by Miranda Richmond Mouillot at 6:08 PM No comments:

Email ThisBlogThis!Share to TwitterShare to FacebookShare to Pinterest
Labels: these are the people in our neighborhood, vasco de gama 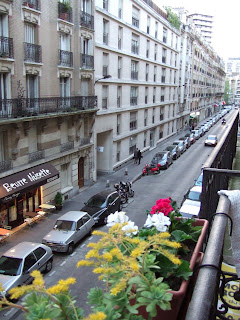 Vasco de Gama was a Portuguese explorer who, among other things, did a lot of bad stuff in India.
I hope it was for more noble reasons than that
they named our street after him.
You can see what it looks like.
And soon you can meet the people in our neighborhood...
Posted by Miranda Richmond Mouillot at 6:03 PM No comments:

For a long time I've done my best to blend in,
wearing grownup shoes, learning
the rules of soccer and never
mentioning peanut butter.
It's only fair to your adoptive country, and it has its rewards.

Julien and I were having a beer in a café near Notre Dame
and two teenage girls sat down. There was
no doubt about it: they were from the United States of America,
and they were SO EXCITED TO BE IN PARIS.
Let me tell you, you could just feel the glamour of them twinkling all over, Paris-happy eyes,
tennis shoes tired from walking, sklathed in their chairs, bristling with seeegahretts,
drinking cafay, drinking cafay oh lay, and du van du van du vin!!! This is the life!
Talking a mile a minute. Oh my god. So excited to be in Paris.
We were discussing our
new president (the one they call President Bling Bling)
and I was just warming to my topic
when their was a pause in the girls’ hyperactively raphsodic
conversation.
I noticed them looking at us.
“French girls are so dramatic, aren’t they?” one of them said.
They nodded blissfully and lit another seeghahrette.
Posted by Miranda Richmond Mouillot at 9:03 AM No comments:

we really should have known better,
but we did it anyway,
we called the number one pizza delivery company in france,
Speed Rabbit Pizza
and asked them to bring us some pizza:
the two person special menu (only EUR 19.90).

forty five minutes later,
a young man with his scooter helmet still on his head (musn't reveal rabbit's identity) handed over the goods.
twenty euros ($800) for pizza, appetizer, and dessert for two.

eagerly, we sat down to our long awaited feast.

presumably it was the great wind
stirred up as the speed rabbit
dashed towards us, pell mell,
through the streets of paris
that had cooled it down.

during the wait, we discussed the following:
in america, your pizza is delivered piping hot. without lifting a finger, you sit down and eat it.
in france, if you want your pizza hot, forces must be mobilized. you have to act.
we drew some parallels - obesity, the state of their respective democracies -
and then rushed to eat the pizzas
before they cooled down again.

we plan to discuss the issue further while we search for our desserts, which seem to have gotten lost in the cracks between the floorboards.
Posted by Miranda Richmond Mouillot at 7:58 PM 2 comments: 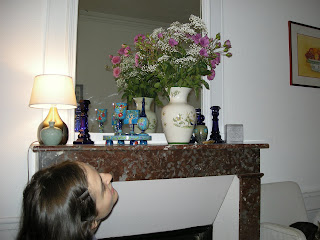 gerald durrell was right.
if you feed aspirin to saddish roses,
they recover their vigor with thrilling speed.
at least i think
it is thrilling.
Posted by Miranda Richmond Mouillot at 11:00 PM No comments: