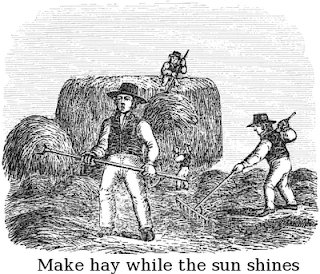 Translated literally, faux ami means “false friend”:
it’s a word you ought to be able to snap like a Lego
out of English
and into French
(or vice versa)
but you can’t.
One false friend that still occasionally trips me up is “isolation,”
which means “insulation” and not “isolation.”
If, when describing Alba to a Frenchman, you mention the "isolation," he may start thinking about
fiberglass versus cellulose and thermal coefficients
as you try to conjure a solitary village perched on a hill, looking out over endless rows of grapevines.
Of course, insulation can be a confusing topic even when you’re not worried about translation –
or maybe I should say that translation can be a problem even within a language.
I’m thinking of what the French call a quid pro quo, which, as it happens, is another example of a faux ami.
In Latin, quid pro quo means “this for that.”
In English, it denotes a tit-for-tat exchange.
In French, it is what tends to occur when you bring together the two main populations of Alba,
the good ol’ boy set
and the organic-crunchy-yuppie set.
At a recent party, we overheard Rafael,
who is a builder,
chatting
with Daniel, who quit his office job to move to the country and build straw bale houses.
“Straw bales are the future,” Daniel enthused. “Have you read much about them?”
“Not sure exactly you’d need to read about them,” said Rafael.
“That’s how I feel,” Daniel exclaimed. “It’s what’s so great – they’re just intuitive.”
“I guess so,” said Rafael.
“The only thing you really need to know about straw bales,” Daniel observed, taking a gulp of his artisanal beer, “is that you have to be careful not to pack them too tightly.”
Rafael poured himself another pastis. “Uh-huh,” he said.
“Because if you pack them too tightly,” Daniel went on, “the straw gets crushed, and then you lose the hollow part in the stem that holds the air, and it’s not as effective.”
Rafael took a long, thoughtful sip of pastis. “Well I wouldn’t worry too much,” he said. “You know, you bale it, you roll it, you stack it, I don’t think your animals are gonna be that picky – if it’s straw, they’ll eat it.”
Posted by Miranda Richmond Mouillot at 3:27 PM