You probably know the joke about the Jewish Robinson Crusoe who, showing his rescuers around the island, points to the two synagogues he has built.
“Why two?” they ask, and he replies, “This is the one I pray in, and this is the one I would never set foot in.” 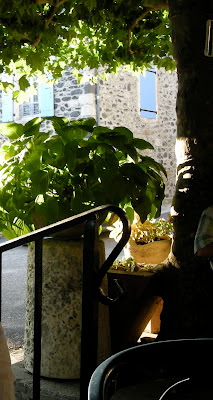 Alba has two cafés. There is the café everyone goes to, and the café no one ever sets foot in. The café no one goes to has a checkered past. Years ago, no one went there because it was a hangout for members of the extreme right. Then it was bought and cleaned up by a nice respectable couple but no one went there because before it had been a hangout for members of the extreme right. The nice respectable couple sold the place to a man who acquired a reputation that involved stabbing, which tends to drive off your clientele. Recently it changed hands again, but no one goes there now because why go to a café that was once owned by an alleged stabber when you could go to the perfectly good café you’ve always gone to on the other end of the village?
The café everyone goes to is called the Bar du Château. Recently they got a new awning and we all noticed it was actually called the Café du Château, but everyone still calls it “le bar.”
The bar is owned and run by two brothers, Alain and Serge. Cafés and bars in rural France are purely utilitarian, they serve a social function in the same way the post office and the bakery do, and the décor in the Bar du Château reflects that: there is a zinc-topped bar, some wooden chairs and tables, a linoleum floor, and a room in the back with a pool table. The lights in the back room only go on for special occasions, so if you feel like playing pool, you have to do it in the dark. The beauty in the bar is on the terrace, which is shaded by four sycamores that were pruned by Alain and Serge’s father so their branches would grow into one another to form a living canopy.
But I’m not actually here to tell you about the bar. I’m here to tell you about the time I baked a chicken à l’etouffé and scalded myself as I pulled the dish out of the oven. The backs of my fingers swelled with ugly white blisters the size of dimes. I ran to the pharmacy, and the pharmacist gave me some cream and bandages and told me to watch out for infection. “It's going to leave a scar,” she warned me.
“We should go to the bar,” Julien said, when I came home and related this to him. “I should have thought of it sooner – they can conjure it for you.”
The word conjurer is nearly a thousand years old, and you won't find the definition that I'm about to give you in the dictionary. Most French people have never heard of it, and indeed the verb “to conjure” has mostly gone out of use in the land of the Enlightenment. If you employ it these days, it’s probably because your exasperation has risen to a fever pitch and you find yourself in a lather of erudition: you can conjure someone not to park in front of the mailbox, for example, or to quit interrupting you, or to leave the toilet seat down.
But at the Café du Château, or, more precisely, in Alain and Serge’s family, the word means something else, and has for generations. When Julien and I got there the day I burned myself, Julien held my bandaged hand out for Alain to see, and Alain pointed to his oldest brother, who never said much and is now long gone. “Come into the light,” he instructed. He took my hand in his and gently unwrapped the bandages. “You should have come sooner,” he told me. “You should have come right away. Does it hurt?”
I nodded.
Still holding my hand, he circled his thumb above the burnt skin, moving his lips almost imperceptibly. “There,” he said, when he had finished. “You’ll feel better in a few minutes.”
“Should I put the bandage back on?” I asked. “The pharmacist said I’ll have a scar.”
Alain’s brother shook his head. “You should have come sooner,” he said again. “But I don’t think so.”
He let go of my hand and walked back to his seat at the far end of the bar. I called out a thank you, but he didn’t reply.
Within a few hours, the blisters were gone, and by the end of the day my hand didn’t hurt anymore.
Alba doesn’t have any synagogues, and attendance at its little church has been dropping steadily since the mid-nineteenth century. Signs of the sacred are few and far between in our village, but if you’re looking for succor, I recommend the bar where everyone goes. Since my own adventure with the oven I have seen conjuring help burns from chemicals, radiation, scalding, sunshine, and chemotherapy. And even if your skin is unscathed, a cold drink on that shady terrace at the end of a hot August day is enough to soothe even the most scorched of spirits.
Posted by Miranda Richmond Mouillot at 3:36 PM

The first thing I thought of when I saw that you were writing about the word "conjure" is a quote from Act II, Scene 2 of Hamlet, where Hamlet is trying to get Rosencrantz and Guildenstern to reveal the motive behind their visit to Elsinore.

He says, "[L]et me conjure you, by
the rights of our fellowship, by the consonancy of
our youth, by the obligation of our ever-preserved
love, and by what more dear a better proposer could
charge you withal, be even and direct with me,
whether you were sent for, or no?"