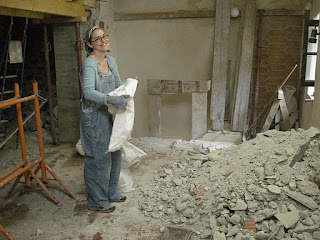 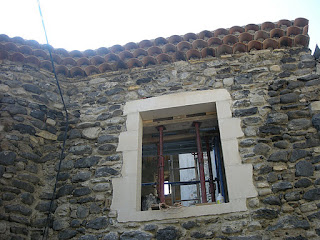 Récuperer is the verb with which you regain possession, use, or enjoyment of something spent, lost, left, lent, or entrusted to someone else. Like its English colleague, recuperate, it comes from the Latin: re – back – and capere – take. It comes to the rescue, gives you time off to compensate for hours worked overtime, neutralizes potentially opposed ideas, and heals the sick and injured. Most of all, it gives new life to objects that would otherwise go in the trash. The French language has subjected this verb to its own treatment and made it into a noun to describe and categorize both the things you have recovered, reclaimed, or rescued: la récup’. La récup’ is a also a pastime, a calling, a matter of pride.

Photos: this may look like a pile of rubble, but it is full of stones that we sorted out for Julien to use when he added height to the streetside facade. (Can you see where the new part of the wall begins?)
Posted by Miranda Richmond Mouillot at 5:07 PM

I've spent a lot of time at the local dump recently, returning from whence they came, all the treasures Mark found there :-)